A chance change in hotels introduced us to a world class veterans memorial. For those travelling I-80, it’s worth the stop to visit and spend some time in honor of those who have served in our armed forces. Since wintering in Arizona, a twice-a-year three-day drive between Fargo and Buckeye usually finds us with an overnight stay at North Platte, Nebraska. Usually we arrive late in the day, tired from a long day’s drive and being very efficient so we don’t drive a lot out of our way, we stay at one of the hotels near I-80 and the junction of Highway 83, the two highways we typically travel in Nebraska. Early the next morning we arise early and leave town just after daybreak. In the fall of 2016, we happened to pick a different hotel, one on the opposite intersection of the junction of the two highways. As we entered the parking lot, we noticed a large sign in the adjacent lot that read, “Veterans Memorial.” After checking into our hotel on this cool, somewhat windy evening, I grabbed the camera and we headed toward the entrance.

What we discovered is certainly one of the largest roadside military memorials we’ve seen. The main entrance arch features the sign in the image above, two eagles landing astride the pillars and a dove of peace standing on a globe. Just past the entrance, a sculpture of three soldiers at rest welcomes the visitor.

Four long concrete slanted bays containing rows of bricks honoring the names of men and women who have served during the 20th century. Presumably they are all from Nebraska, but I didn’t find any specific reference to locations of those named. Most bricks simply named the individual, their dates of service and possibly their service branch. Standing among the bays, statues of servicemen keep watch. The bronze statues depict and honor individuals from each of the services, all from Nebraska. The Navy sculpture below features Lt. Commander Walton Erickson, a pilot ready to climb into his aircraft on the pitching deck of an aircraft carrier. 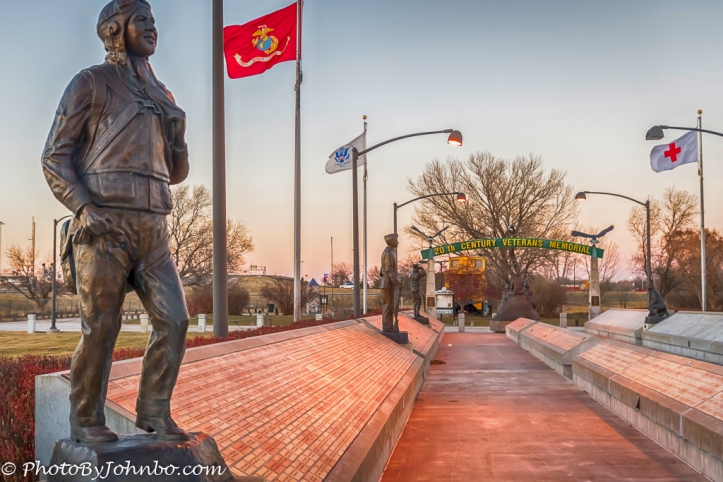 Depicted below, the major feature of the memorial is a large wall of sculpted brick that features the five major conflicts of the 20th century. From World War I, through Desert Storm, the beautiful sculpted wall highlights servicemen at work in the defense of our freedom.

The memorial is easy to find, located just south of I-80 on the east side of Highway 83 (2811 South Jeffers Street for your GPS.) The display is well lit so it is open for viewing 24 hours a day.  The gallery of images below features other views of the memorial captured that cool, breezy evening in North Platte. Click on an image to enlarge it and to scroll through the gallery.

The dove of peace at the top of the entrance. 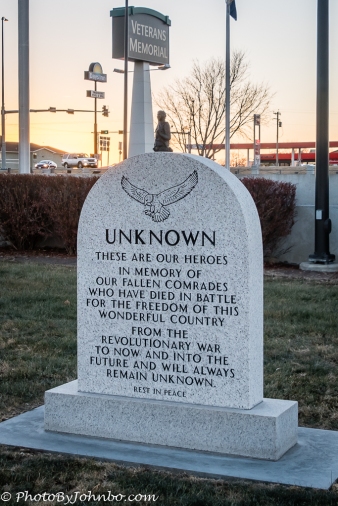 Memorial to the unknowns.

Memorial to those served at the North Platte Canteen in WW II.

A plaque documents the creators of the monument.

Until 1947, the US Air Force was known as the Army Air Corps. 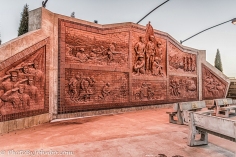 A view of the brick bays. 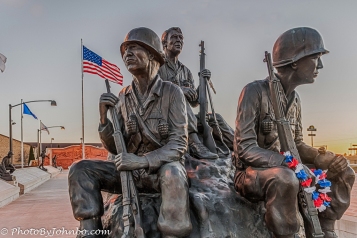 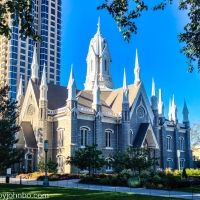 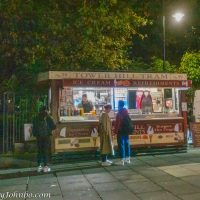 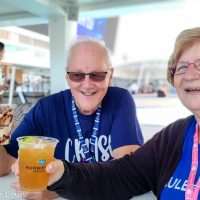 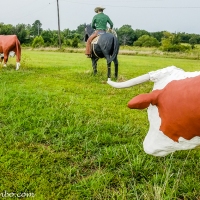