In this week’s photo challenge, Erica V. asks us to explore the elements of earth, air, water and fire.  The land masses around the globe have been shaped and sculpted by the erosive actions of air and water. Fire, in the shape of molten lava provides additional sculpturing of landscapes, and is probably the only medium of the three that allows the growth of a land mass. You can read Erica’s entire challenge post here. While we cannot see the air around us, we can certainly see its effects. At the north end of the Hawaiian island of Kauai stands a lighthouse on Kīlauea Point. The location is a wildlife refuge, and the lighthouse is a beacon for mariners to avoid running into the island in the dark. In the image above, looking east from the edge of the lighthouse park area, it’s easy to see the daily sculpting of the north shore. The prevailing winds push the Pacific Ocean in waves that strike the shoreline, sometimes weakly, sometimes with great strength as in the image above, but always relentless as it collides with the rocky shore many times an hour, day by day, year by year, through the centuries.

On the island of Oahu, to the east, down the island chain from Kauai, the rocky lava base at the shore has an opening at the surface that extends outward, under water to the open ocean on the southeast end of the island. On windy days, the waves are powerful enough to travel from the ocean through the underground lava tube to be released geyser-like with a strong vertical force. The Helona Blowhole can spray water 30 feet (10 m) into the air.

While the two opening photos feature the combined action of wind and water, the image above features a desert landscape that was shaped mostly by the action of the air. No doubt there have been rains on occasion, but in the arid New Mexico environment of Tent Rocks, it would be a safe bet that wind is the primary sculptor of the teepee-like shapes. 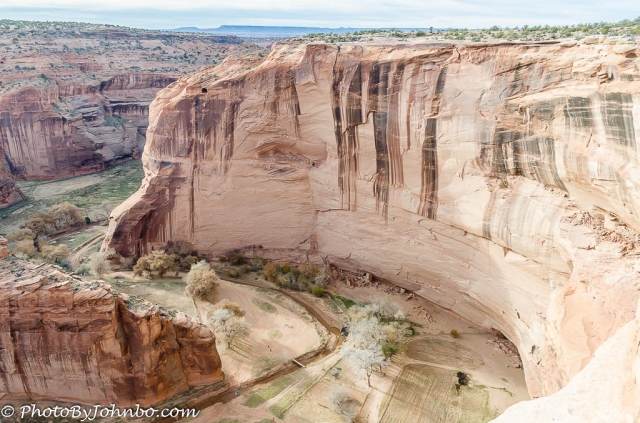 Water, by itself, is a major sculptor of land masses. Probably the most well known is the Colorado River’s sculpting of the Grand Canyon in northwestern Arizona. At the northeast end of the state, near the town of Chinle, Arizona, a small river runs much of the year as it has done for centuries, carving out miles of rock and earth. Canyon de Chelly (de-SHAY) is part of the Navajo Nation and in its own way is much more beautiful than the Grand Canyon (in my opinion, anyway.) In the image above, if you look into the canyon, you’ll see a small footbridge that crosses the river. Click on the image and, if your browser supports it), you’ll view an enlarged image. On the flat area left of, and in line with the bridge, you might pick out two tiny dark specks.  Those specks are two people who had just crossed the footbridge. Adjusting my zoom lens to it’s maximum range at 300 mm, I captured the two people just as they were getting ready to cross the footbridge.

It is amazing to think that over the centuries, this little stream’s meanderings etched out something so magnificent as this canyon, some 700 feet (213 m) deep. The Rio de Chelly flows westward out of the Chuska Mountains near the Arizona-New Mexico border and ends its journey just west of the canyon. 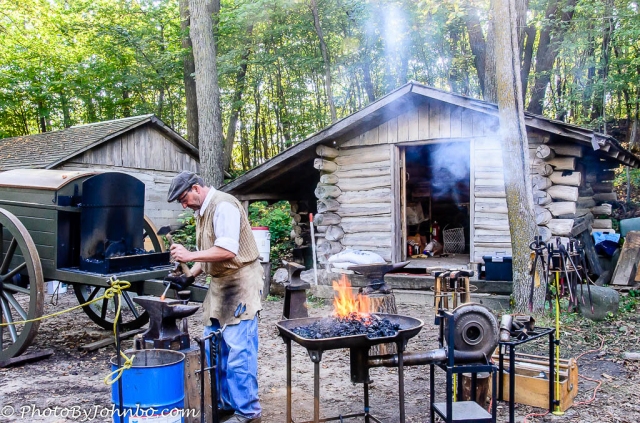 My final image features the last of the elements mentioned. I don’t have any images of any naturally occurring fires, and I have yet to capture live hot lava flows. The closest image I have to elemental fire is the above photo of a blacksmith using fire to heat iron to make it malleable to create a tool. In this case, the fire itself is nourished by natural means, though it is fed by a small electric fan when a higher oxygen content is needed to generate a higher temperature. 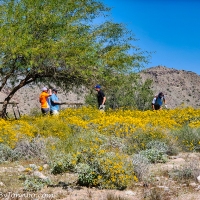