Travel between Las Vegas and Phoenix or Las Vegas and Laughlin, Nevada brings you near the old mining town of Oatman. The town was named after Olive Oatman, an Illinois woman who traveled west with her family. When she was 14, her family headed into hostile territory where Olive and her sister were captured and became slaves. Her remaining family were killed except for her brother who was beaten and left for dead. Upon recovering consciousness, he wandered until he reached a settlement. Shortly thereafter, he returned to bury his family.

Olive and her sister were probably captured by Tolkepayas, (Western Yavapai). The tribe eventually traded the girls to the Mohave who apparently treated them better than their first captors. Olive’s sister died young, but after a five-year captivity, Olive was returned to white society with Mohave tattoos on her face in keeping with Mohave culture. But I digress, this post isn’t about Olive Oatman, it’s about her namesake mining town. you can read more about her life here.

We came to Oatman via Laughlin, Nevada, the story of that trip will be told in next week’s Travel Tuesday post. Suffice it to say, it wasn’t via the Mother Road, it was more of a mother of a road… but I digress again. In the photo above, coming in from the west, the first building we came upon is the Oatman Post Office. By all appearances, it is a fully functional post office. You can get touristy, buy a post card from the gift shop and have it mailed with a special Oatman Arizona cancellation stamp.

Visitors will note that wild burros wander the streets of Oatman looking for handouts. These burros are descendents of the animals used in the early days of mining in Oatman. The mines opened around 1906 and by 1942, the last of the mines were closed. The burros were released into the wild to fend for themselves. Though they look tame, the animals wandering around Oatman today are truly wild descendents of those working burros from the Oatman mines. Warning signs note that these burros will bite and kick if provoked.

We arrived in town in the early afternoon and we were ready for lunch. We chose the Olive Oatman Restaurant and Saloon. Even though it was after the lunch hour, there were plenty of customers. After a short wait, we were seated and presented with a simple restaurant menu. Our food was good and the price was reasonable for a tourist stop. After our meal, we headed outside to continue our walk through town.

Turns out we were just in time for the Gunfight in the Street. An old west tourist town wouldn’t be worth its salt if it didn’t have a gunslinger show complete with good guys and bad guys. Twice a day the Ghost Rider Gunfighters hold a Wild West Shootout with plenty of comedy that is quite entertaining. Showtimes are 1:30 and 3:30 daily, though the 3:30 show may be cancelled in the summer due to the heat. You can even “get hitched” at a real shotgun wedding put on by this group. If you come to town on a tour bus, your bus might just get stopped by this gang of ruffians who board your bus and hustle everyone off for a special tour bus performance.

We were surprised to discover that Oatman has a tie to North Dakota. Walking along the main street, we came upon this sign on a leather goods store. I think it’s ironic that I cannot buy North Dakota produced leather goods in North Dakota, but I can in Oatman. Next week, as I noted earlier, I’ll feature some of the gorgeous scenery along the stretch of Route 66 and on the road between Laughlin and Oatman. The trip there and back deserves it’s own special post. The gallery of images below features images captured in Oatman. In most browsers, you can select an image to enlarge it and to scroll through the gallery.

We missed the egg fry this year. 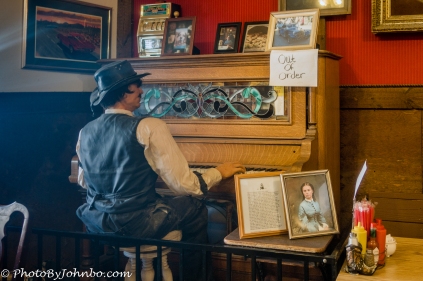 Begging for a treat.

10 thoughts on “Oatman Arizona – A Sidetrip on the Mother Road”