In previous posts here, I’ve focused on Canyon Lake, a reservoir created by one of a string of four dams on the Salt River. In 1925, the Mormon Flat Dam was completed creating the smallest lake in the chain. The lake is about 50 miles (80 km) from Phoenix. Only about 15 miles (24 km) from the city of Apache Junction, the drive is scenic and winds through the Tonto National Forest and parts of the Superstition Mountains. 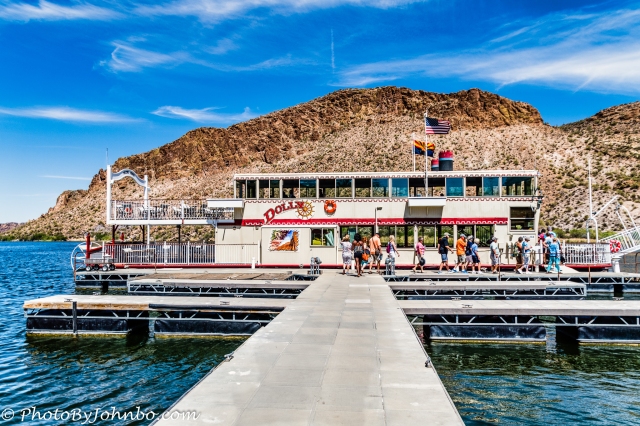 The steamboat has been operated by the same family since 1987. The steamboat’s name, “Dolly” came from the original owners, Dolly and Paul Kennedy. The vessel accommodates 142 passengers and a crew of 3. The tours are popular and on our first trip to the area we were unable to purchase tickets as they were already sold out. Be sure to order your tickets in advance. 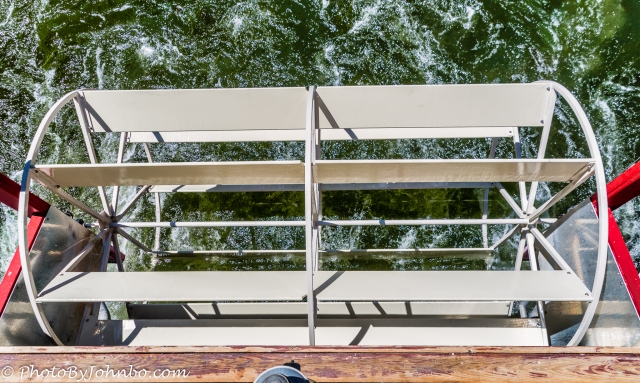 Though the large paddlewheel at the stern gives the impression it’s a steam powered boat, it’s powered by twin 225 HP John Deere marine diesel engines. We found the crew of three to be enough to provide all the service and attention we needed. Members of the Verrado Hiking Club made this excursion a club outing for us.

Our pilot for the day was Senior Captain Jeff Grimh, Co-owner and CEO of the company. A US Air Force Veteran, Jeff has piloted the Dolly for over 25 years. 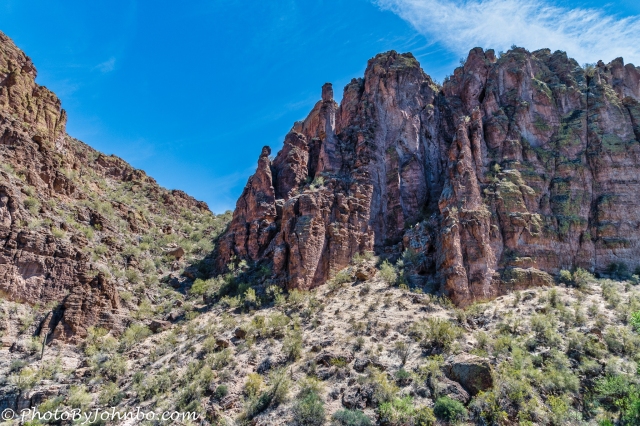 We didn’t just come to visit Canyon Lake for the boat ride, but to view the beautiful desert scenery and hopefully get a glimpse of the wildlife that inhabits the area. Wildlife photographers, bring your long telephoto lens along. You will need it. I brought my Nikon D500 camera with 16-300mm Tamron lens. The image above shows the 16mm view of an outcropping. The image below features a view of the tip of one of the outcroppings in the upper center of the image. You’ll note a family of bald eagles nesting there. Had we not seen the mama eagle fly to the peak moments before, we might not have noticed the two fledglings in the nest. We aren’t even sure they were visible before their mother landed.

There were plenty of eagles to see in flight. We even watched an aerial battle between a hawk and another bird I didn’t recognize. (That’s not surprising, I’m not a birder.) I tried to capture some photos of the battle, but they were at a very high altitude and trying to keep the high speed aerial maneuvers in the frame at a great enough zoom level was beyond my capabilities. The only shots I captured were at a much wider angle zoom and had so little detail, they weren’t worth sharing. Having noted that, I will always remember the action between the two combatants. 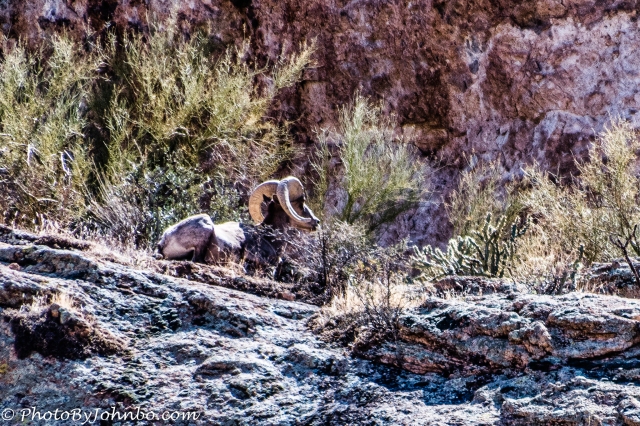 The zoom lens, again at full extension, gave us some great views of the Bighorn sheep that live in the area. Even at full zoom extension, I cropped the final shots in post production to give viewers a better look at these magnificent animals. The D500’s APS-C sensor and 20 Megapixel capacity provides enough quality for web posting. If I expected to print any of these images, though, I’d want either a full frame camera and appropriate lens or at  least a 600mm lens on the camera I have. Whether or not that lens would be usable on the deck of a moving vessel is another question I can’t answer until I find the resources to purchase one.

Once the sheep start to move, especially as the lower sheep in the image above, jumping to a higher point on the rocks, you’ll want to use a fast shutter speed to be sure you get a sharp image. For techie types, this image was captured at f/6, 1/500 sec. ISO-100. The gallery of images below features some other captures of these mountain residents. On another day, cruising on a relative’s boat, we weren’t so lucky to get views of Bighorn sheep. On that trip, we saw only one, very high on top of one of the tallest outcroppings.

Though it looks relatively small from this viewpoint, Canyon Lake extends through the narrow opening in the rocks you can see in the image above. From there, it extends some distance to the point it becomes the Salt River again. There the Dolly turns around and heads back to the dock for a cruise that’s well worth the price of admission. In addition to the 1.5 hour, six-mile cruise, they offer a three-hour bighorn sheep cruise with Arizona Game and Fish Biologists and two different dinner cruises. You can find more information on there cruises at their website here. The gallery of images below features high resolution photos I captured that day. Most browsers will allow a higher resolution view. Just click on the image to enlarge it and to scroll through the gallery.

Home of the eagles

The Dolly under power