I don’t know what it is about Cartagena, but something in this city clicks with me. Its crowded, narrow streets would be a horror to drive (as witnessed from the side window of our tour bus). Maybe it’s the historic old forts there. Maybe it’s the stone wall that surrounds the city center, built centuries ago as protection from marauding pirates, maybe it’s the movie, “Romancing the Stone.” The opening photo above features a view of the old walled city was captured from the top of the Castillo de San Felipe de Barajas.

Rest assured, next week we will visit the Castillo, but this week, we focus on our trip through the old city. In 2013, we passed the fort with but a description from the tour bus driver. But I digress… 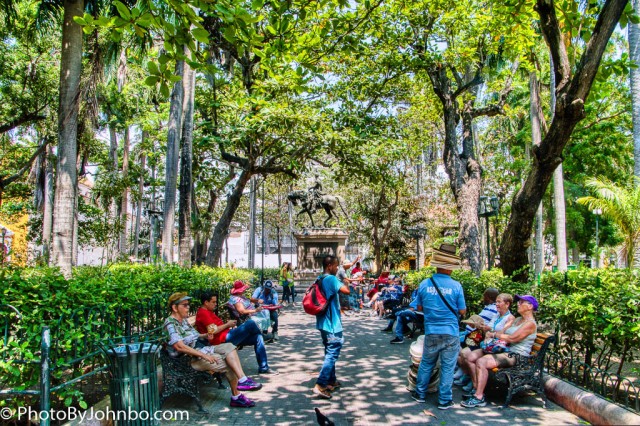 Our tour guide walked us through the central city for awhile, pointing out some historic buildings, then left us to our own agendas. We wandered the city square and surrounds along with several dozen other cruise ship passengers on similar tours. It was a hot day in the early afternoon and we found a small coffee shop where we ordered some cold drinks. My drink of choice, a pineapple, banana, coconut drink. Very tasty.

In the photo above, note the photograph (slightly out of focus) on the wall behind the drink. That is ostensibly Jaun Valdez, the Colombian coffee grower of Colombian Coffee. Many readers of a certain age may remember the commercials of Juan Valdez and his burro loaded with sacks of coffee. The character has been featured in Colombian coffee commercials since 1956. Juan is a fictional character and the photo on the wall is appropriate as this coffee shop is one of the many in the Juan Valdez Coffee Shop chain. There are franchise coffee shops even in the United States, though I confess I’ve never seen one before.

We were “assaulted” by many vendors on the streets as we navigated the collection of small shops in the downtown tourist area.Though the subject of this photo is the vendor, the tall balconied houses brought back memories of our earlier visit to Cartagena. Then we toured the city in a horse-drawn wagon and I captured several of those balconies ablaze with plants in bloom. You can check out those photos and read about that excursion here.

We were but a short walk from the Plaza de San Diego. I spent some time watching the gentleman in the photo above feed the pigeons. They were obviously used to eating out of his hand. I must have watched him for 15 minutes or so, each handful of food being quickly devoured by a portion of the many pigeons gathered around him. 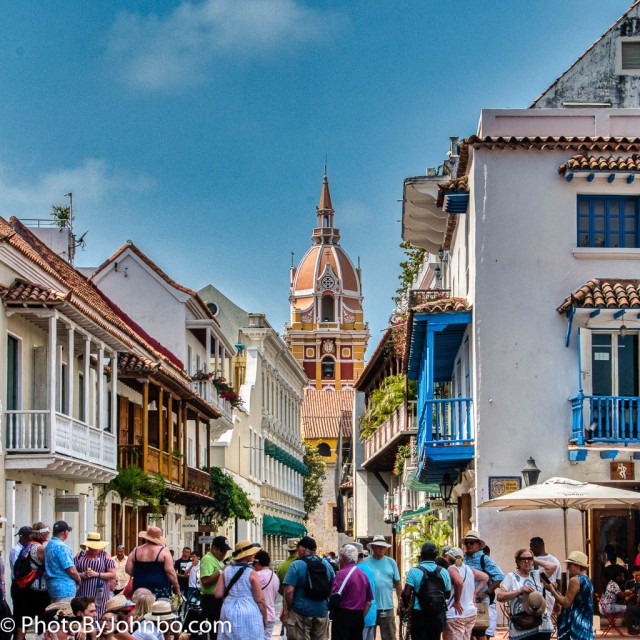 While we were in the plaza, we didn’t escape the throng of cruise ship guests, but the old homes and shops in the shadow of that beautiful tower made up for the throngs of people “in our way.” We had plenty of time to explore and by the time we were to meet the tour guide for our ride back to the ship, we were ready to enjoy the luxury of our air conditioned bus as it careened through the maze of traffic and narrow streets. I submit for your review a gallery of images captured while downtown and invite you to click on an image to enlarge it and scroll through the gallery (if your browser supports that function.) Next week we visit the fort. See you then.

Bocagrande view from the ship.

Another fort guards the harbor.

Tree in the town square. 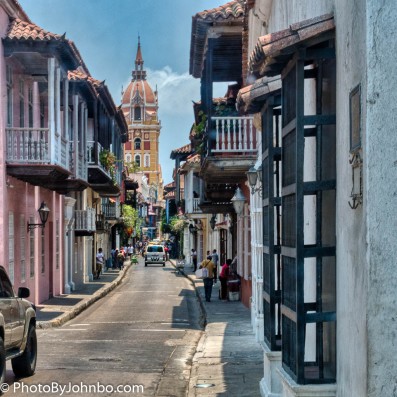 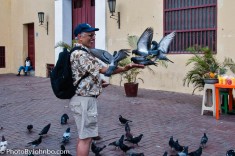 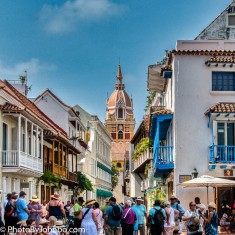 Mmmmm. Cold and tasty on a hot day.

View of the walled city.