Pronounced La Hoy-ah, this photographer who grew up in California was at least a dozen years old when I realized that La Jolla and La Hoya were the same place. OK, that may be a bit of an exaggeration, but not by much.

On the day we visited the Cove at La Jolla, I don’t know who had the greater population, the people or the birds. As it says on the La Jolla website, the water is calm and ecologically protected… Because the water is protected, surfboards, boogie boards and other flotation devices are not permitted. 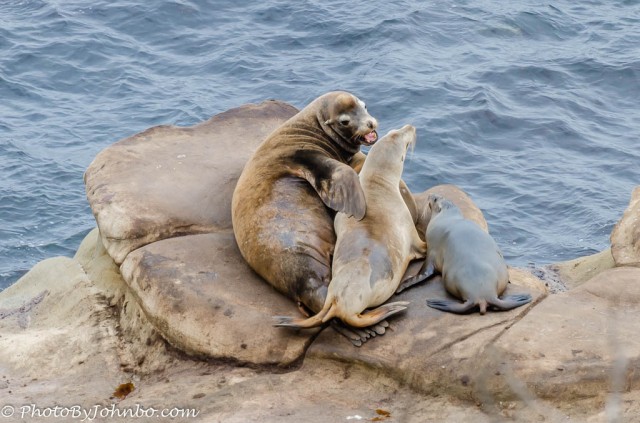 The wildlife is abundant at the Cove. This bull sea lion was barking menacingly at another bull who was encroaching on his space. Sea Lions, Harbor Seals, Leopard Sharks, Garibaldi, Brown Pelicans and Cormorants are just a few of the wide variety of wildlife that you will find in the protected waters of the cove. Yes, you can swim with the Leopard Sharks, if you can find them. This species of shark is elusive and harmless. Adults can reach up to 6 feet (1.8 m) in length, and in the spawning season, late summer to early autumn, pregnant females are attracted to the warm water to help them in their live birthing process.

Water sports are popular pastimes, but there are those, like myself and this gentleman, who prefer to walk along the shore, resting along the way and enjoying the views.

The Cove has interesting caves and tunnels where people and wildlife explore and enjoy.  Kayakers, snorkelers and scuba divers can get up close and explore the shoreline. The only negative thing I can say about the area is that the air is pungent with the smell of the sea and the large amount of wildlife, er, ah, shall we say, residue.

The furthest beach area in the image above is the Children’s Pool. The man-made cove is a great place to take the relatives and friends from out of town. The winter and spring are great times to view newborn seal and sea lion pups.

The gallery of images below features images captured on the day we visited La Jolla Cove. Click on an image to enlarge it and to scroll through the gallery.

This guy was not afraid of my camera.

The lifeguard station at the public beach.

Giving me the lookover.

Plenty of opportunity to capture seagulls in flight.

A tunnel and cave at the edge of the beach.

A view of the walkway along the shore.

A bull sea lion and his harem.

The Children’s Beach in the background. 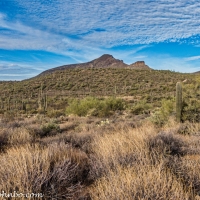