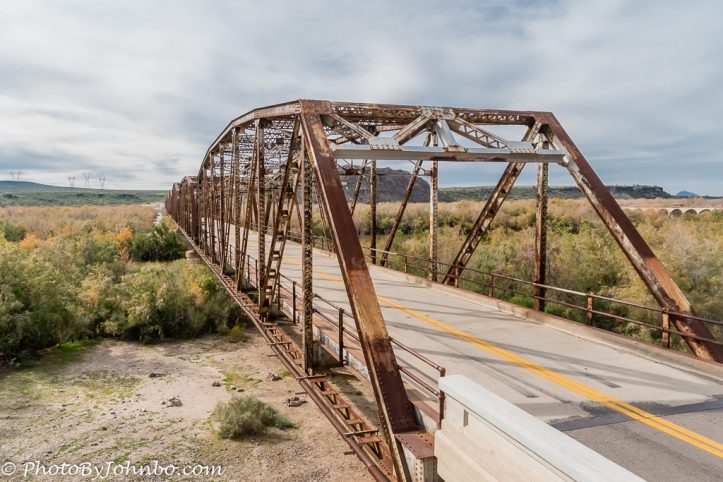 On one of our hikes, I was visiting with a hiker friend about places to visit that are “off the beaten path”, places that avoid the hustle and fast paced Interstate highways. Our friend, Leenie told us about just such a place, the Gillespie Dam Bridge. She and her “biker friends” find many of these out-of-the-way places to simply enjoy the journey. Between our home in Buckeye and Gila Bend, the usual 40-minute drive on AZ-85 can be modified to only add 10 minutes yet take you back to an earlier era when US Highway 80 was part of the National “Ocean-to-Ocean Highway”. In 1956, US 80 was shifted to the east and this section of highway was decommissioned and eventually became a state route, then a Maricopa County highway.

Along the way, the small town of Arlington is barely noticeable except for the Co-Op Grill, a lunch destination of choice for our biker friends and a fitting stop for our Orange Pony Mustang. You can expect great bar food and a comfortable outdoor patio when the weather isn’t too hot. But I digress… this isn’t a restaurant review, so after a burger and fries, we hop in the Orange Pony and we are off to Gillespie Dam.

The dam itself was built in 1921 by a private rancher, Frank Gillespie. After failures of earth, stone and wood attempts to dam the Gila River, it took a concrete structure to provide the irrigation this rancher needed. In 1921, a highway was rerouted south from Phoenix to Yuma. The new Phoenix-Yuma Highway used a concrete apron on the downstream side of the dam to allow cars to cross the Gila River shortly after the dam was constructed. Due to the unreliability of access during high water, by 1925, the highway department was designing a bridge a short distance downstream of the dam.

At the time of its construction, it was one of the longest bridges in Arizona and its unique design for its time was more resistant to washouts than earlier bridge designs. By 1927, the bridge was open and officially became part of the transcontinental highway, US 80.

View from the center line.

A closer view of the plaza just downstream from the bridge.

A view of Gillespie Dam.

These days, traffic is mostly local on old US 80.

Another view of Gillespie Dam.

The historical perspective on Gillespie Dam Bridge was gleaned from here. 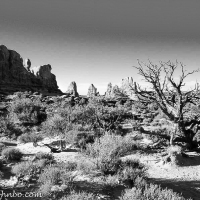 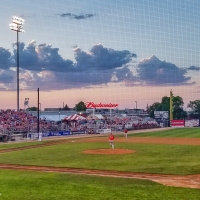 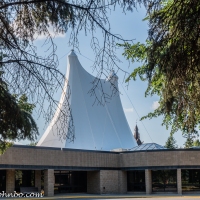 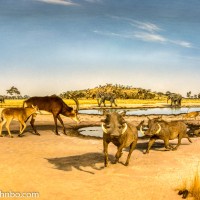